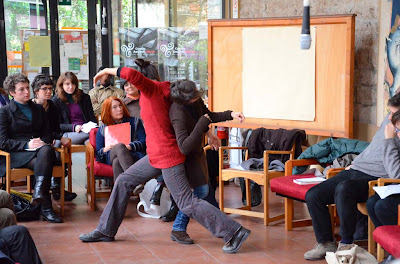 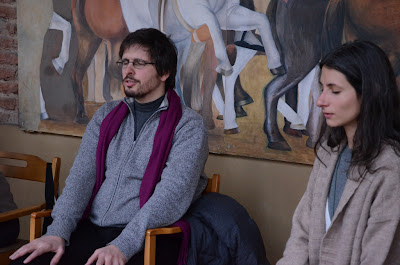 At the Cabral Space’s meeting there were about 50 people. After a short presentation, the three relators, according to the point of view of their field of study or work, expressed their opinion about the chosen theme: consciousness. An entomologist spoke about three different types of consciousness: a consciousness related to the rational experience, a consciousness  related to a functional expression and another one related to the meditation, as a spiritual experience. Giorgio Lulli spoke about Shroedinger, who elaborated a point of view on the world, which bridges between a spiritual dimension of consciousness and the world of physic. Antar Marincola told us about his plural consciousness, which puts in relation the color of his skin, the fact of being Italian despite his mother is from Somali. Many other interventions took place, according to different points of view. Of particular interests were the interventions of the Islamic Nasiru, a Nigerian teacher of mechanics, who has being living in Bologna for many years and Giampiero Cane, a musicologist, journalist and Professor. Cane affirmed that the consciousness exists only when we perceive something, all the rest are “tales”, his testual words. As a consequence of what Professor Cane said, we decided not to continue a discussion which would have brought to no conclusion. Our goal was just to show different points of view. 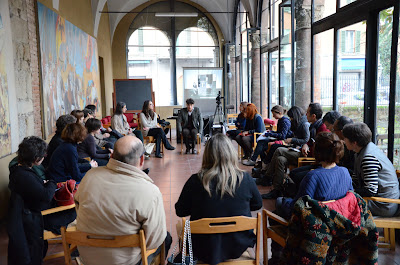 Afternoon
The selection of keywords and the choral experience (expressive approach, intuitive)
If in the morning, we gave our rational and analytical contributions, in the afternoon an expressive and intuitive approach was required. For this reason Serena Teatini, musician and composer was invited. After having selected a certain number of keywords obtained from the previous conversation, Serena Teatini, led those present to live an experience of “being conscious “ of the words, by saying or singing them in a choral form. All of us gave their contribute to the choir and some sang as soloists. We wanted to bridge the intellectual dimension of the morning, with the attitude of expression linked to feelings and sensations.
Conclusion.
It was a test of a meeting which reached an embryonic stage. With one more day of work we might prepare a performance in choral form, in order to present it at the final event scheduled at the end of the course. There will be a two day long festival, during which, the results of the laboratory will be played as performance and presented to the audience.